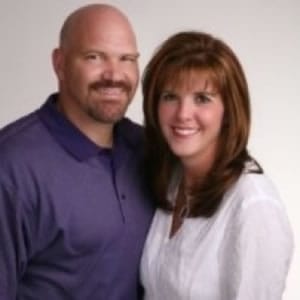 Jeff Schreve is a passionate communicator of the Gospel of Jesus Christ. He is a graduate of The University of Texas at Austin (1984), with a degree in Business Administration. After spending twelve years in sales, God called Jeff to preach.

He graduated from Southwestern Baptist Theological Seminary in December of 2000 with a Master of Divinity degree. He served as Pastor of Membership and Missions at Champion Forest Baptist Church in Houston, TX from 1997 to 2003. He was called to First Baptist Texarkana as Senior Pastor in February of 2003 (www.fbctexarkana.org). God has blessed the church with wonderful growth, excitement, and spiritual transformation.

He began a radio and television ministry called From His Heart Ministries (www.fromhisheart.org) in January of 2005. The mission of the ministry is to reach people right where they are with the love and life-changing power of Jesus Christ. Currently, From His Heart airs worldwide on The Church Channel, and around the nation on FamilyNet, CTN-Cornerstone, The Walk TV Network, Christian Satellite Radio, KHCB Radio, Oneplace.com and Lightsource.com.

Pastor Jeff and his wife, Debbie, have been happily married for 27 years. As a couple, they are part of the marriage speakers team for Family Life Ministries with Dennis Rainey. They have been blessed with three beautiful daughters: Jill - 26, Amy - 23, and Sarah - 21 ... and one awesome son-in-law, Jay Budzilowski, and the sweetest little granddaughter, Emmy Rae (3).