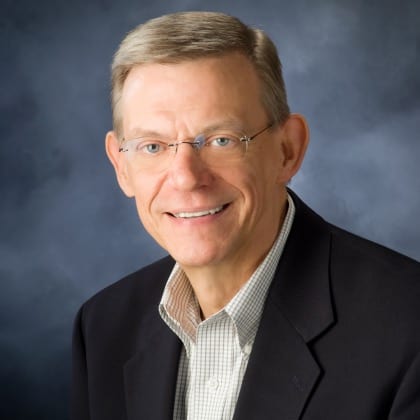 Rubel Shelly (Ph.D., philosophy / Vanderbilt University) has spent his adult life in Christ-focused ministry through preaching, teaching at both graduate and undergraduate levels, and writing. His commitment is to a non-sectarian presentation of the gospel.

Shelly ended a 27-year ministry with the Family of God at Woodmont Hills in Nashville in 2005. He also taught at Vanderbilt University School of Medicine and Tennessee State University while in Nashville. Two of his recent publications are Divorce & Remarriage: A Redemptive Theology and I Knew Jesus before He Was a Christian . . . and I Liked Him Better Then.

After moving from Nashville in 2005, Shelly served as Professor of Philosophy and Religion at Rochester College in Rochester Hills, Michigan. In May of 2008, Shelly was named President of Rochester College. In January of 2015, he returned to Nashville to accept the position of Distinguished Professor of Philosophy and Religion at Lipscomb University and to inaugurate studies in medical ethics at the university. Since the summer of 2017, he has reduced his teaching load to adjunct status in the graduate program at Lipscomb and now works as an associate member of Interim Ministry Partners.

He and his wife, Myra, have three grown children and nine grandchildren.

with Dr. Rubel Shelly
What does the Bible teach about divorce and remarriage and how does it apply to God's people? Listen to Ron Deal's conversation with Dr. Rubel Shelly on a subject that's hard to understand in Scripture and often disagreed upon in Christian circles. View Show Notes →