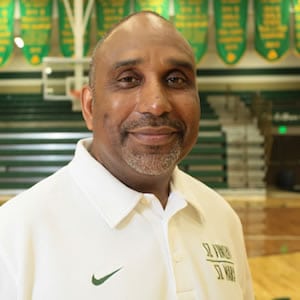 Dru Joyce II is head basketball coach at St. Vincent–St. Mary High School in Akron, Ohio. In his 12 seasons, he has guided the team to a national championship, three state championships, nine district titles and five regional crowns, while garnering one National Coach of the Year award. Coach Dru was born and raised in East Liverpool, Ohio. He is a graduate of East Liverpool High School and holds a degree in business administration from Ohio University. After leaving a career in the corporate world, Dru built a business around the sport of basketball. His King James Shooting Stars Classic Tournament, now in its sixth year, is one of the largest and most respected travel team tournaments in America, drawing over 600 teams. He is also the Executive Director of the Northeast Ohio Basketball Association. Coach Dru is the author of Beyond Championships: A Playbook for Winning at Life.